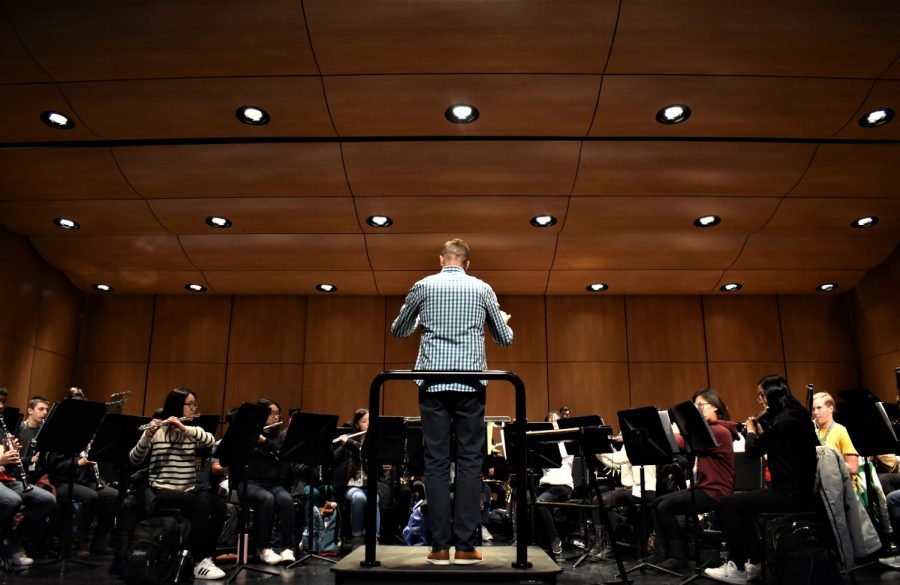 After 17 years at the high school, and a total of 20 years in the district, Hourigan will be teaching at Cranbrook, an independent college preparatory school in Bloomfield Hills.

“There’s definitely trade-offs but for me and my career at this point in my life and the age that I am this is a good thing for me,” Hourigan said.

Hourigan’s wife is a teacher at Cranbrook and his daughter, a junior there.

“It was a tough decision. It’s kind of bittersweet, you know, I love so much of this place,” he said.

The students and the relationships Hourigan has built with them year after year is what he will miss the most.

“It’s unlike any other teaching position here,” Hourigan said. “To see [the students] not only grow and mature as people, but to watch them grow as musicians and be able to be a part of their accomplishments.”

Many students describe how strange it will be coming back next year to a director who is not Hourigan.

Ashley Fan, a junior and Bassoon player in Wind Ensemble, described what she believes Hourigan has offered Novi.

“…One of the greatest mentors and teachers the Novi community school district has ever seen,” Fan said.

According to Hourigan, knowing that it is his last year has not changed his approach in class.

“There’s still a lot to do,” Hourigan said.

But with June fast approaching, Hourigan has been reminded that it is not just a normal concert, but his last–his last band banquet as well.

“It’s just the end of the year is going to feel a lot different once we get to that point,” he said.

The musical accomplishments of the band program have lived up to Hourigan’s hopes, though it had been up in the air with the cold weather earlier this year disrupting school.

“I remember being at this point, a couple weeks before Festival, wondering, ‘Oh my goodness. I just–I don’t know if we’re going to be ready.’”

But, they pulled through. The Marching Band finished in the top five of “our flight,” he said. As for Concert, Symphony, and Wind bands, all three got 1s (the top score) in each applicable category in March.

“They worked so hard, we worked hard together,” Hourigan said. “They really played their hearts out.”

“We’re going to lose someone who has honestly led this program to where it is today and I know he’s going to be missed by all the students.”

Lizzie Babcock, another one of Hourigan’s students, says that, though a loss, it’s certainly not the end of the line for the band program.

“He’s a really good teacher and he provides a really strong program,” Babcock said. “If we pick the right person, who’s just as qualified to do the job as well as he can, we’ll be fine.”

As of now, the group has a lot to accomplish before the end of the year, from picking drum majors to holding auditions for higher level bands.