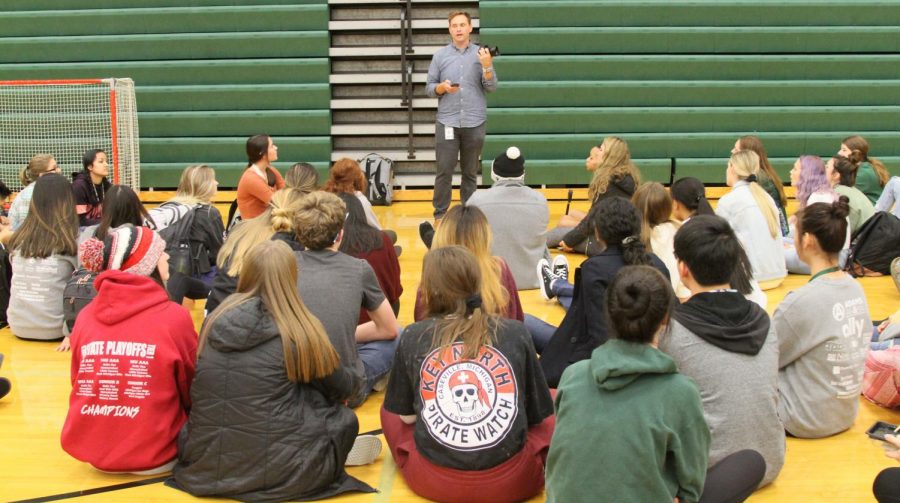 French Teacher and Youtuber LeTarte Reflects on Second Schoolwide Production
Q. How do you think this year went compared to last year?
A. This year was dramatically different. I think that everybody had a sense of comfort that may have not necessarily been a positive thing in terms of people thought, “Well, we know what we’re doing. We’ve done this before.” And so sometimes it’s easy to forget some of the small details. I think we had a lot more groups. That is my fault because I offered it to more people. So I think in retrospect I would have less singing groups, so that they could be more organized.

Q. What led the song choices this year?
A. I wanted to be more in charge of it this year, not because I didn’t like the music but because it was very difficult going through everyone’s music. I wanted to kind of already do it. So I picked a lot of the songs along with my little team. We also offered the kids an opportunity to submit songs, so I did take some of the songs that were submitted. My goal was to try to keep it upbeat as much as possible.

Q. How was the route picked this year?
A. There wasn’t a lot of thought, other than the beginning. And I wanted to go through the atrium, cause I thought the atrium looks cool. And I wanted to end on the football field. But the rest of it, basically just figured out where could we get to in order to get to the end, so I thought it’d be fun to go through the Cat Rack, which we did. We’ve never been to the offices, that was just kind of different. Really just the beginning and the end is what dictated it. I’d’ve loved to get on this side of the building with the art rooms, the media center – but it’s just too much, there’s too much going on to get here, then to get back.

Q. What did you think of the representation this year?
A. I think it was harder to tell, because kids crowded the singers more. So I think the last one, it was easier to watch the sides, and to see some things. I felt like the first one, that was a lot more about celebration of the school. This one felt just more like a, like a big Tiktok, I guess. Yeah, which is okay, it’s not a bad thing, it’s just not what I anticipated.

Q. How do you think your involvement was in terms of what kids were supposed to do?
A. I did not give any direction, other than “you need to talk to each other, and you need to figure it out.” Some teams did a really good job of splitting up the songs. Some teams argued over what line they were going to do, some teams didn’t talk to each other. And so that was where it just kind of iffy. If we had had more time, I really think we could have done it one more time, and it would have been pretty good. But we’re out of time, like we only had AA to do it. So, if you start creeping into more time then people get upset and you gotta change schedules.

Q. Did the larger amount of people involved affect the video?
A. I didn’t anticipate that, I really thought that the stands will be full. And they weren’t, and the freshmen, sophomores were kind of slow to get to the stands, so that took more time than I had hoped, getting that full. Once we ran through at one time. They were good. They understood what they were going to do. The second time we ran through it, as soon as I get to the door, you see the kids just bustin’ down, going to get to the field house, so I was like ok, the light bulb went on for them, so they kind of figured it out.

Q. Do you think you’ll be making another Lip Dub next year? Will this become a tradition?
A. I think that was the last one for a while. A couple of reasons: One, I think that I already knew that less people would watch this one because the first one is always more exciting, right? It’s kind of a trend I think that is dying. Two, it’s just a lot of organization. So if we do it again, maybe in a couple of years, but right now I’m not planning on doing one next year.

Q. If you were to do it again, would there be things you’d like to improve or change?
A. I would make less groups. I want to include everyone like that’s the ultimate goal. But I also want people that are in front of the camera to be good at what they’re doing so I I think I would have more practice. But the problem is that people are busy, like it’s hard to get people to commit. They’re already over committed as it is, so it’s just kind of that fine line between how do you get people to practice, yet find time to do it. So, in a perfect world, I’d have less groups. I would have a little bit more practice. And I think I would have to have a bigger team help me.

Q. Do you have any other thoughts about the lip dub?
A. It’s a really surreal experience. It’s like everyone else is kind of counting on you to know, like I felt a lot of pressure for it to be good. And not that it wasn’t good, but it was just different than the first one. For the first day or two, I just felt like, “Oh, it could have been better, if I had another 30 minutes. Oh, I could have talked to this person. Oh, you know what I should have done, I should have gone to every spot, made sure they knew.” And I didn’t micromanage it enough, so I wish I had just a little bit more time I think it could have been pretty cool.