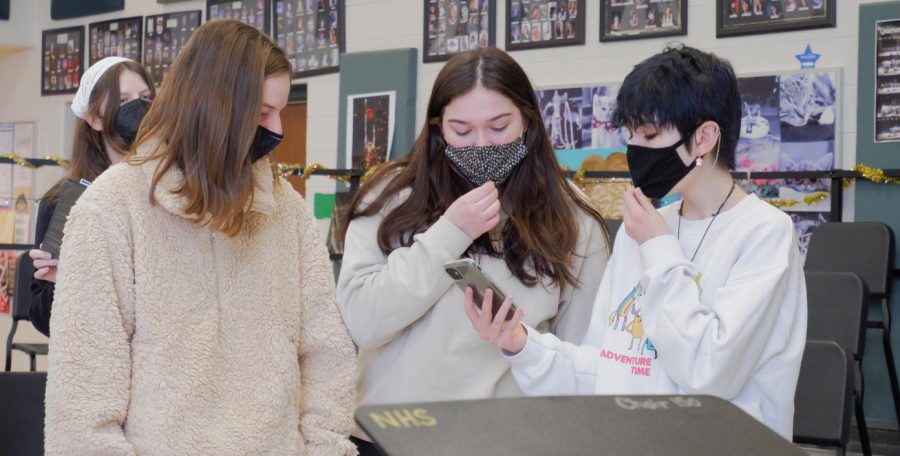 The performing arts students and programs faced challenges due to the COVID-19 pandemic, with limited contact and extensive restrictions. Regardless, students adapted and continue and move forward.

Before the pandemic, Dance teacher Ashley Zardus said a typical dance class would consist of students coming in and warming up.

“Everyone would come in and lay on top of each other and just laugh with each other,” Zardus said. “It was very hard to keep dancers away from each other, so taking that away took a lot out mentally from my dancers.”

Zardus said that dance is a more hands-on learning experience. She said removing such aspects was difficult. The department had to eliminate any sort of partnering and lifts.

After coming back to school for the 2021-2022 school year, Zardus said [the students] learned to not take things for granted.

“Just knowing how important touch is,” Zardus said. “Not necessarily for dance but for anything, period. Just hugging someone when you see them come into the room is something that is very big, especially with dancers.”

She said that, as restrictions were lifting, people became more comfortable hugging each other as they felt more welcomed within their space.

Before the pandemic, all types of theatre work was done in person with no changes to their usual routine.

“It was all in person, there was no virtual anything,” Drama Club Vice President Sabrina Costello said.

During the 2020-2021 school year, however, One Act was completely virtual, with a few rehearsals being done together in person, spaced out and in separate rooms, and the Fall Play performance was held outside. The Musical was performed inside on the auditorium stage, with the actors wearing clear masks. The audience was seated in specific seating in the auditorium.

Overall, performances had to change in order to meet proper restriction guidelines of social distancing, from the way they would rehearse to their performance areas.

For the 2021-2022 school year, the students in the choir program sang in masks. Schurig said rehearsals have now been mostly back to normal, with the singers being able to sing together again.

“Last year there was a study that we followed where we could only sing for 30 minutes in person, and we couldn’t sing in circles,” Choir Director Claire Schurig said. “You had to have a change of mask.”

During the 2020-2021 school year, both the hybrid and virtual choirs weren’t able to rehearse as long as they usually do, as they could only sing for 30 minutes at a time.

Both online and in person classes weren’t sectioned out as they normally would have been. In the beginning of the semester, there were some hybrid classes that had around five people, while others had more. All the virtual students were assigned to one class, consisting of 86 students.

“Every day, that group of 86 did an exit ticket, and sometimes it was super light, like, ‘What’s your favorite color?’ and sometimes it was like, ‘How are you doing?’” Schurig said. “Kids would just write books to me, about how much they were struggling, how hard it was, how alone they felt.”

Online choir students did not have the same experience they would have had being surrounded by others while singing.

“Naturally, a few things took a hit over the last year and a half. You know, vowels and tones aren’t quite where they would have been a year and a half ago, but I don’t care,” Schurig said. “I’m just so happy to be making music that those things will come.”

“My main focus is creating a joyful space after the last year and a half that has happened, and a place where you guys can just come and make music together.”

Schurig said she wasn’t too concerned about reinforcing choral techniques so early in the school year, and prioritized students being comfortable and bond with each other.

“I hope that the kids who return have like a renewed sense of appreciation for what we do, how much of a community choir is and how important that community is,” Schurig said. “And how even if you love to sing and even on Zoom, singing muted every single day simply isn’t the same as being surrounded by other people making music with you.”

Band members had to come prepared with bell covers, often made of an elastic material, to place over the bell of their instrument to reduce the spread of aerosols.

Band Director Matthew Diroff said what they worked on was fairly normal, but they used the auditorium stage for their classes, which gave students additional space in between them for practice.

“In the second semester, we had combo classes, so we had a hybrid class going on while other people virtually Zoomed in,” Diroff said. “That actually worked much better because then people could feel like they were playing along with the class.”

Diroff said virtual students had a sense of actually playing with other students, as they could hear multiple people playing at once in the hybrid class rather than one person playing at a time over Zoom.

“The other really big goal that we focus on is establishing a community environment in the classroom, marching band, jazz band, and really trying to emphasize having a family kind of atmosphere,” Diroff said.

Diroff said helping students maximize their potential and improve helps put together stronger performances, allowing students to perform more challenging music as well as reach higher levels of skill and improvement, one of his biggest goals.

However, because of the pandemic, Dirrof said students weren’t really able to develop as a group. Instead, it was mainly individual progress.

“So for us, the virtual and hybrid students could come in after school. We still had to be six feet apart and all that, but I could rehearse them on stage so we did get to do that once a week and put a concert together at the end of the year.”

Overall, the performing arts classes are not just about students learning the material as the teacher instructs, but also the community built throughout the year. The COVID-19 pandemic affected the curriculum as a whole, but it didn’t stop many of the students from coming back and continuing on.

“I think those relationships and things like that are more important than just, for a social development aspect,” Van Eizenga said. “I think in the orchestra or any ensemble, band or choir, if the kids don’t really know each other, then they struggle to play together more.

“They play at the right time and the right notes and things, but it’s not a cohesive sound like it is when they really know each other and have those relationships.”