Incubator hosts “Flix on the Field” event for charity 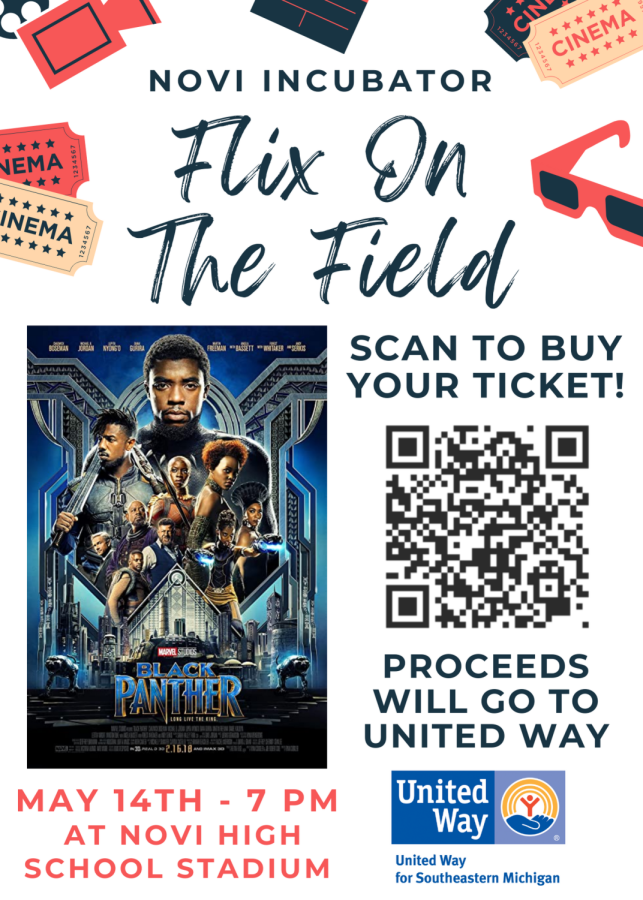 Every year, the Incubator class carries out a large group project that reaches across the school and community. This year’s project is called “Flix on the Field,” a movie night fundraiser held at the football field on May 14.

The profit from this event will go directly towards the non-profit international organization United Way, specifically to the Southeastern Michigan chapter, for their Read United program, a program that buys books for children in underprivileged communities.

Following a poll of roughly 800 people, Incubator decided to screen Marvel’s “Black Panther.” The event will start at 7 P.M., and the movie will begin screening at 8:15 P.M. Within the event will also be information booths about United Way, photo booths, outdoor games, concessions and different ways to donate money.

Assistant to the Henns (AttH) Julia Tauro, one of three student leaders of the project, said that the event is open to all members of the Novi community and beyond.

“We hope as many people as possible can come,” Tauro said. “We are specifically targeting Novi High School and Novi Middle School students, but we also would love to have elementary school students, parents, other community members and people who are even outside of the nearby community. Just really anybody who wants to support United Way.”

Tauro said a lot of thought, discussion and deliberation went into researching a charity that Incubator wanted to represent.

“We definitely didn’t just go into this decision lightly on where we wanted to donate to. We knew we were going to be generating a large sum of money, and we wanted to make sure it had a great impact,” Tauro said. “And so we started with deciding which areas were important to us. And we decided education and inequality were important.”

Tauro said a representative from United Way who is in charge of the program met with the team and told them about how important reading is for children.

“Reading at home is so important, and so through our movie night event, we’ll raise money for these children and help them help improve their whole lives really, which is awesome,” Tauro said.

But Incubator almost decided against a movie night, Tauro said. They considered options such as a 5k Color Run, a game night, or a family fun night. Tauro said that, in the end, the class decided on a movie night because they wanted to work on something they were passionate about.

“We felt like we could invite students and we could tell them like we can tell our friends ‘This is something you should come to,’” Tauro said. “We didn’t want to spend all our money on games or having somebody come in and organize stuff for us.”

The week before “Flix on the Field,” Incubator is hosting a spirit week with each day corresponding to a different theme. More information on the exact themes of the spirit days will come out prior to the week.

Tauro said that Incubator’s attendee goal is at least 400 people, but aims to reach bigger numbers.

For those who wish to donate but cannot attend “Flix on the Field,” Tauro said that donations can still be sent by purchasing a ticket but not attending the event. Tickets can be purchased for $10 along with a 50 cent processing fee by scanning the QR Codes on posters around the school, or by clicking the link on Incubator’s Instagram or Twitter bio.

Tickets can also be purchased at the door for $15. They will not be refunded in the event of weather cancellations, and will instead act as a donation.

In the end, Tauro said that “Flix on the Field” is an opportunity for the community to come together to aid a good cause while also enjoying the night.

“I think primarily, it’s a really great fundraising opportunity for United Way. The work they do in southeastern Michigan, like right in our community right next door with our neighbors Detroit, is so so important,” Tauro said. “And if students and community members can donate through our event to this, this would be incredible.”

“We haven’t had the community come out in a big way for many things. And we want this to be a chance for people to come. We want to see the community all together, students, adults, young students, and just a really great coming together for a great cause and a really fun night.”