Clean up your act 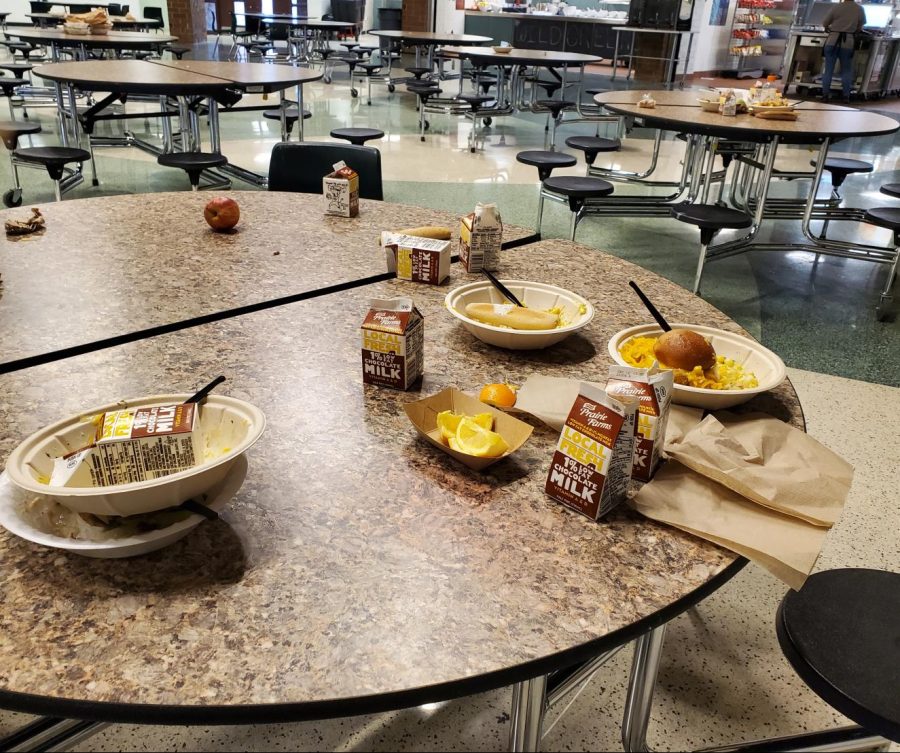 We have been in school for around six months or so and I think it’s time we address the amount of trash in the lunchrooms.

I’m positive most of us know about the mess left in the lunchrooms, and yet few of us pick up anything, which I completely understand.

We are still in a pandemic and, with new variants as well as COVID cases increasing, the likelihood of people wanting to pick up after others is low due to the possible spread of COVID. It’s also gross to pick up other people’s things, with the potential of touching some mystery sauce.

Let me just say that most of you need to grow up. Stop being so wasteful.

Pick up your trash.

I’m not saying that you should pick up every little crumb that falls on the floor, but at least throw away things like water bottles, trays or any kind of bag, whether it be paper or plastic.

The custodians shouldn’t have to throw away something that you can easily do in a few seconds.

It doesn’t take too much effort to clean up after yourself. Trust me, it doesn’t. The longest it may take to pick up your rubbish is five or so minutes.

During first semester, my friends and I took the time to clean up after your mess every day at the end of C Lunch. We were fine with helping the custodians clean up, but it was really annoying cleaning up after many of you.

We have picked up all kinds of trash, from the simplest candy bar wrapper to a small tray filled with milk, marinara sauce and bits of melon along with other miscellaneous foods. We don’t want your forbidden soup and I really doubt you want it too.

Pick up … your trash.

The Cat’s Eye News even made a PSA telling students that they need to clean up after themselves, something I never thought we needed to tell high schoolers, and yet here we are.

That very day, condiments dressed the tables instead of dressing the food. Chicken and lettuce were abandoned on the floor. It looked like leftovers of an elementary students art project.

I had never seen the lunchrooms such a mess. There were either multiple tables with trash scattered about, or massive piles of food on a plate left untouched.

You were already told once to pick up your trash by the Cat’s Eye News, so why is it necessary to say it again.

It honestly could have been a coincidence that people just didn’t feel like being decent human beings, and so they left their trash. But it really did feel like it was on purpose.

I don’t know if some people were possessed, but the day before winter break was the cleanest I have ever seen the lunchrooms. Talk about a Christmas miracle.

But there’s no need to pat yourselves on the back. Really, there is no need. There was still rubbish lying around, and doing the bare minimum is not an accomplishment.

Once returning from break, the lunchrooms weren’t all that bad, I’ll give you that. But it’s still not acceptable. People still left wrappers and bottle caps of all sorts around.

With second semester came a change in classes and lunches,  and my friends and I no longer have C lunch. We don’t have the time to pick up after you. So it’s time to clean up your act.

Grow up, and learn to throw away your things in the proper place.

Also, if you know you are not going to eat your lunch, then don’t get anything. The amount of plates on tables topped with untouched food is just disturbing. Everyone is aware of the long lunch lines and yet you still want to stand there waiting for something you’re not even going to touch. You’re only wasting food and your time, along with everyone else’s.

Learn some self-respect and respect for others. Get rid of your crap. If you don’t want to throw away other people’s things then that’s fine, but at least ask them to. Stop being so immature and do your part.

You’re in high school now, so start acting like it.