The (awkward pause…) that came with the coronavirus pandemic

After more than 15 years of live performances, (AP…) pre-records performances for students to view online 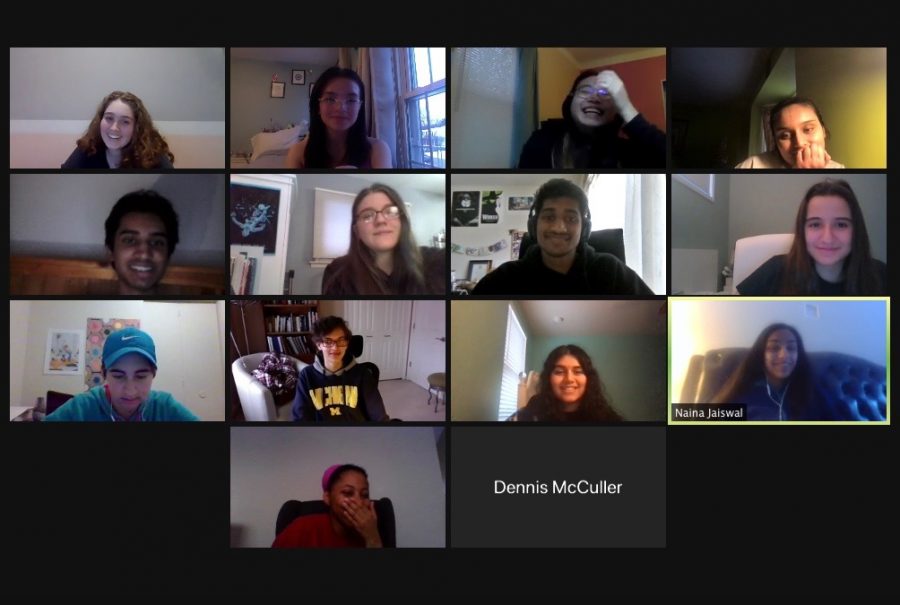 The pitch dark Black Box Theater gives way to a student-led show, in which the (awkward pause…) troupe discusses a variety of relatable student topics, ranging in seriousness, five times a year.

This year, however, the coronavirus pandemic took the option of in person performances away from students. No longer could students and staff sit in the packed theater to watch the show. Nonetheless, (AP…) found a way to perform shows for students – not on the stage, but on the screen.

Troupe members of (AP…) recorded themselves acting out pieces independently, then edited clips together to make a cohesive show. Videos were then uploaded to a private YouTube channel, where a certain grade’s show could be viewed in their corresponding English classes.

It was not an easy process to achieve. Student director, editor, and writer Lisa Chai had little to no experience in editing or using Premiere Pro Rush, a video editing program, going into the school year.

“We now have to edit and use technology, which was a huge obstacle because none of us here knew how to edit,” Chai said. “And so we have a group of three people editing a half an hour show every single two months, which is crazy.”

Although it’s harder to get accustomed to editing an (AP…) show, Chai finds it to be more forgiving in certain cases.

“I think a live show is much more stressful because everything is live. [With] editing, if something doesn’t work out, no one will know because it’s editing.,” Chai said. “If one part doesn’t seem to fit, just delete the whole thing. You can cut it up, you can chop it up, you can do whatever you want with it.”

Filming has also been a different experience for members. They film their individual parts alone, so they are unable to rely on the cues and energy that a live performance usually brings. They must also make sure to look in a certain direction as they act in order to maintain a cohesiveness throughout the performance.

Stage manager, writer, and actress Mariana Barros, who has been in the troupe for two years after moving here from Brazil, has found this to be one of the most challenging aspects to remote performing.

“I feel like theater is all about contact, it’s all about sharing experiences and creating an emotion … When you’re filming you’re literally not talking to anybody else,” Barros said. “So you’re having that energy by yourself. And sometimes it’s hard to coordinate the energy that you are putting into. It’s hard to say things in the same tone and with the same energy, the same connection.”

Not all is lost in the eyes of (AP…). Barros sees the blessings in disguise when it comes to performing during the pandemic.

“We all are learning and finding new ways and discovering, and I think that’s what’s making this year so special and so challenging at the same time,” Barros said.

One aspect of (AP…) is the camaraderie, friendship, and community that comes with it. Over the years, Awkward Pause has built such a feeling through the long meetings they held together.

Typical meetings would be held every Thursday for four hours, where members would sit and share how they are feeling and what they are thinking at that moment. It was in these meetings where ideas turn into performances.

This year, coronavirus restrictions took away the in-person meetings members once cherished, switching to Zoom every Thursday for two hours. Inconsistent attendance, black screen, and Zoom fatigue are all factors that work against the core values of (awkward pause…). Nonetheless, Barros has not seen a loss in the feeling of camaraderie and teamwork.

“We talk. We share. We communicate. When we are putting together the stage rehearsal, we try to share how we feel,” Barros said. “If we’re having a discussion, we always perform it at rehearsal, so we can feel how the energy is going to be, and we all give tips like ‘Oh I think you should go stronger than that’ or ‘you should be madder.’”

“We always talk about how we’re feeling. Something great about Awkward Pause is that it’s a lot about you performing it by the way you feel it and by the way you see it. … We build [shows], as a group, upon it. So that’s something really nice,” Barros said.

UPDATE: (awkward pause…) held the sophomore show in-person. Their annual “Best of” show was held Saturday, June 12th. Auditions for the 2021-2022 year were held, with applicants submitting a video for the first audition, and performing in person for the second audition.