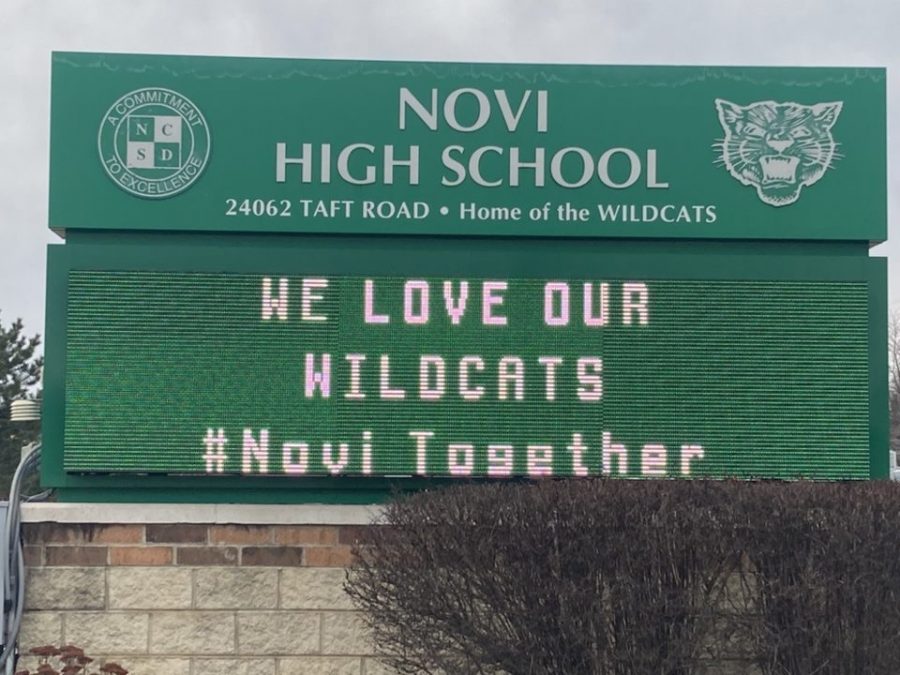 In early March, a Google form survey with an open letter to the Board of Education and Superintendent was distributed by the anonymous group Parents4NoviTogether. The survey asks for information from parents about whether or not they would keep their children at Novi schools and if the “issues and concerns” stated in the survey would affect that decision.

The survey raised questions about the topics the Parents4NoviTogether group deemed sensitive, and claimed that they are not part of the teaching curriculum. These topics include, but aren’t limited to, gender identity, sexulaity, and ideological activist behaviors. The survey questions whether it is OK for educators to discuss these topics with students.

This survey caused reactions around the district.

“When I saw people posting information about the form presented by Parents4NoviTogether, I was shocked to see what the group found problematic,” said Junior Cameron Trumpy in a public comment at the Board of Education meeting on March 18.

“One section that stuck out to me was the aforementioned sensitive topics and then specified that those sensitive topics were race, LGBTQ, etc. Race, ethnicity, gender identity and sexual orientation are parts of people’s identities that don’t get left behind when you enter the classroom.”

One of the main points of the survey states that “the material undermines a school-aged child’s sense of self-worth necessary for a healthy self-confidence and positive mental health for achieving personal goals.”

The group provided a list of demands, one of them including that NCSD needs to “remind parents and teachers of the community that diversity includes not only race, gender, sexuality but also diversity in thoughts or beliefs. We need to make space for all of that with compassion.”

This is one of eight different appeals that were included, but more were listed such as ending cyberbullying, vetting organizations that facilitate workshops at NCSD, and ensuring that material used in classrooms is approved by the school board.

There were five books and stories cited in the survey that the group says are not part of the curriculum.

These books include titles such as “George” by Alex Gino, about a 4th grade girl Melissa, who struggles to be themselves in the world. Melissa transitions into George to become more comfortable in his own skin. The survey claims that George is the fifth most banned book between 2010 and 2019. The book is banned due to supposed sexual content, issues of bullying, rebelling against the police and refusing to take medicine, according to the Marshall Libraries Banned Books list.

Novi alumni caught wind of the survey earlier this week.

“That survey was sent to me by a teacher who no longer works at Novi. My initial reaction was just shock honestly,” Novi 2012 alumna Sukriti Saxena said. “I posted it on my Facebook wall and did a call to action for alumni.

“I felt like the more voices you have behind something the more serious the school board takes it. So I thought if this group can hear how detrimental this is you could stop something from happening.

“As a community, the best way to respond is to just use your voice to let people know what you think and let other people know the pros and cons of this, “The kids who they’d be sending to college would be eaten alive without this information.

“Our district would be seen as taking a step backwards if they adopted the things from the survey, which is ironic considering how diverse Novi has gotten even since I’ve been there.”

The Wildcat Roar reached out to the survey’s anonymous creators via email, but they have not yet responded.